This Butternut and Parmesan Open Ravioli with Burnt Sage Butter and Toasted Hazelnuts recipe is one I recently demonstrated at an event. It has become an extraordinarily popular dish with my friends and family after I created it for a wine pairing evening with Domaine des Dieux at Fern Hill Hotel. I have simplified it since then to make it quick and easy, but still just as delicious – hence why it is now an open ravioli stack! This dish is great served with a side salad with vinaigrette or just by itself. The textures and flavours work harmoniously and create a really interesting, yet simple dish.

Place the cup of flour on a clean surface and make a well in the centre. Crack in the two eggs and add the salt. Slowly stir the egg to incorporate the flour with your fingers until it just comes together. Add the olive oil and knead until velvety and stretchy. Wrap in film and allow to rest for at least 20minutes until rolling it out.
Using a pasta roller or a rolling pin, gradually roll the pasta to desired thinness, remembering that it will swell when it cooks. Cut out discs and dust in flour. Reserve until needed.

In a hot sauce pan place the butter and the butternut. Allow it to brown a bit and add the cream, sugar and rosemary. Stir and slightly mash the butternut until the cream has reduced a bit. Season with salt and pepper. Add in the parmesan and stir it in to melt.

Melt the butter in a small saucepan over a low heat. Once melted, increase the heat until it starts to brown a little bit. Squeeze in the lemon and add the sage and cook over medium heat for about two minutes.

Place 100 grams of hazelnuts on a tray in the oven for about ten minutes at 180c. Remove and wrap in a dishtowel. Agitate the nuts in the towel vigorously to remove the skins.
Cook the ravioli discs in a large pot of rapidly boiling water with salt. (the trick to not allowing the pasta to stick is to have water which is a salty as sea water, and enough water to absorb the starch. So don’t use a small pot to cook pasta).
Remove the pasta once it rises to the surface of the water and for about 20 seconds. Rinse under tao water and drizzle with a little olive oil.
Stack the discs with the butternut mixture. Top with the toasted hazelnuts and drizzle with the sage and lemon butter sauce. Serve hot with a simple side salad. 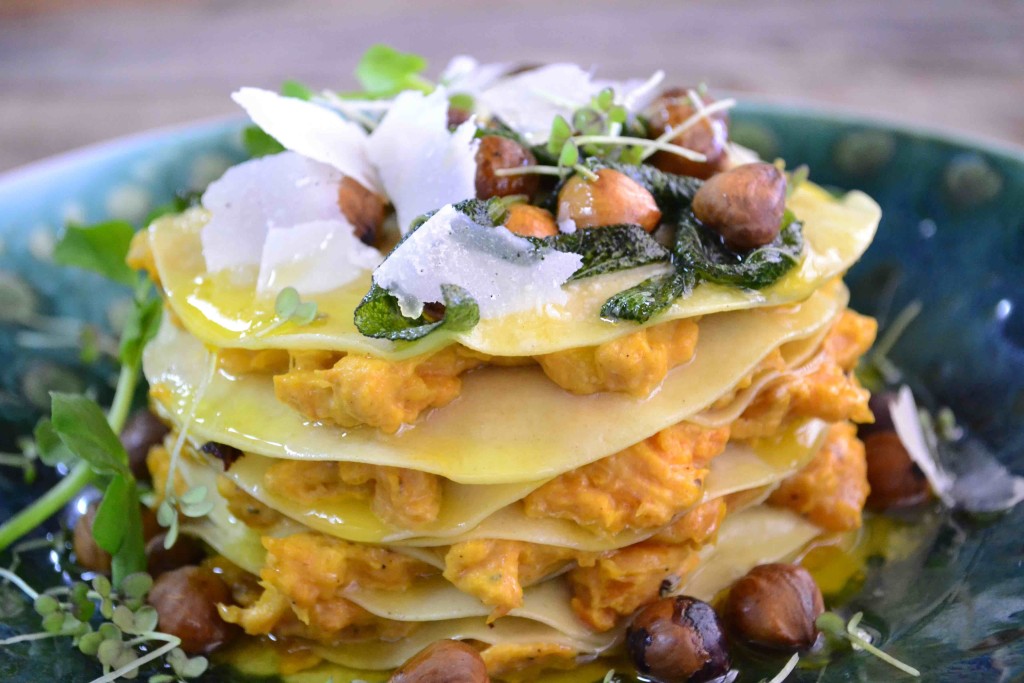 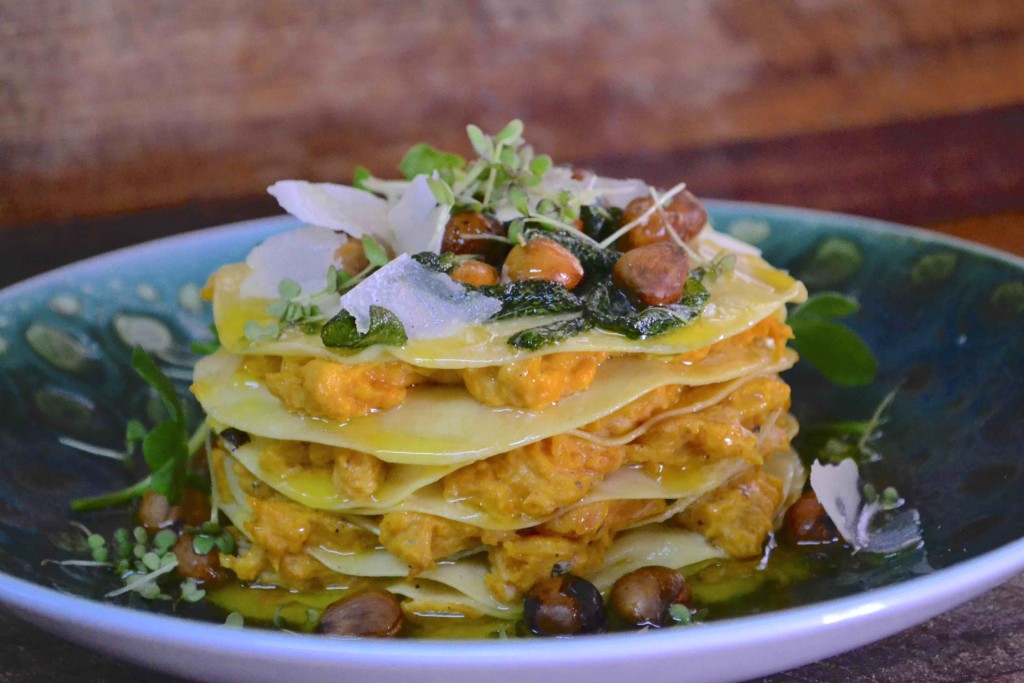 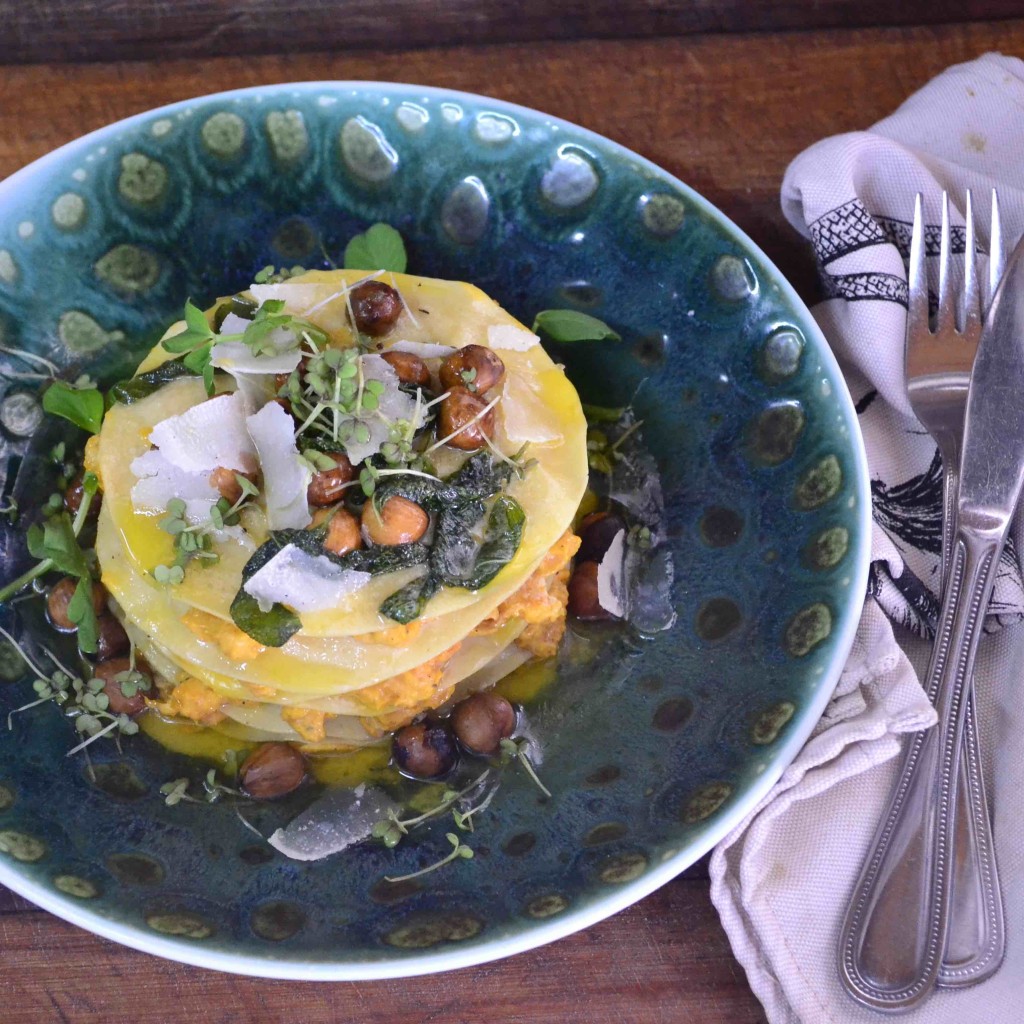 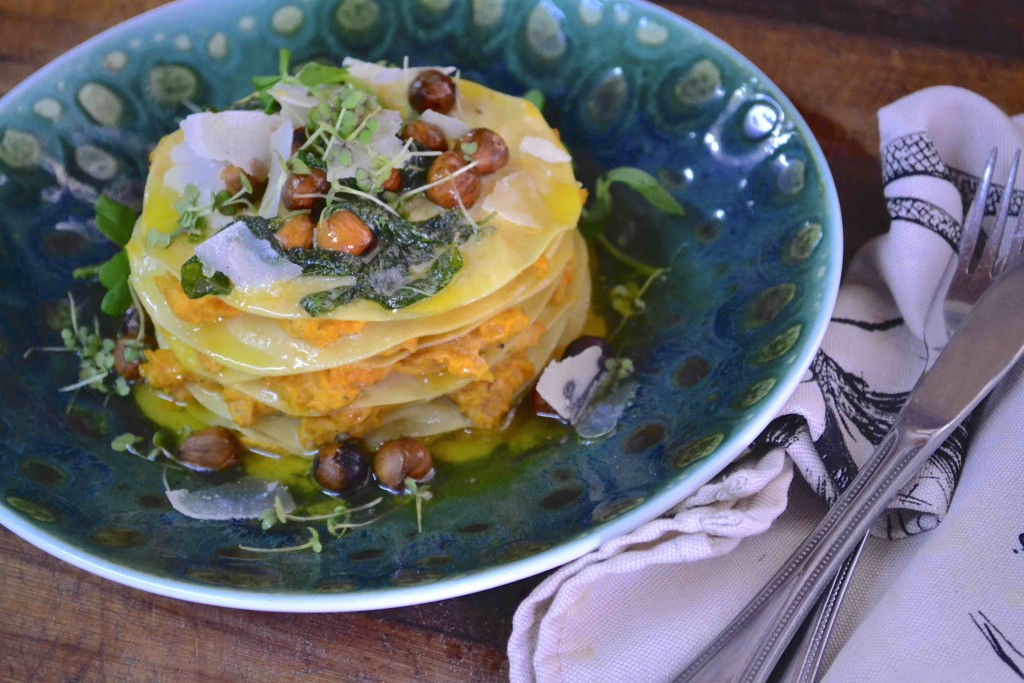 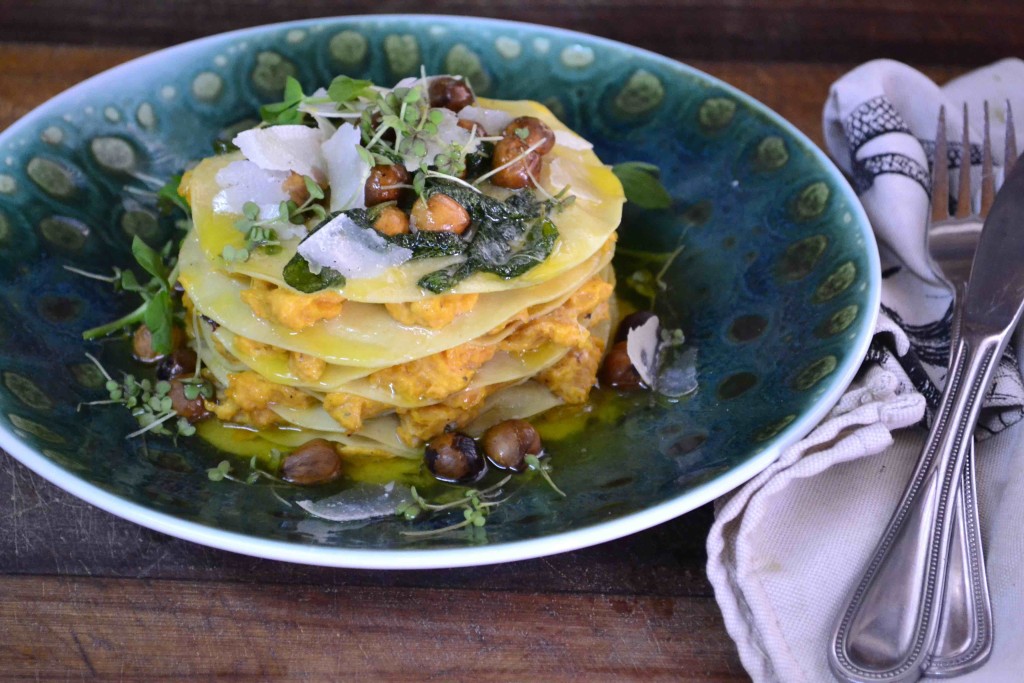 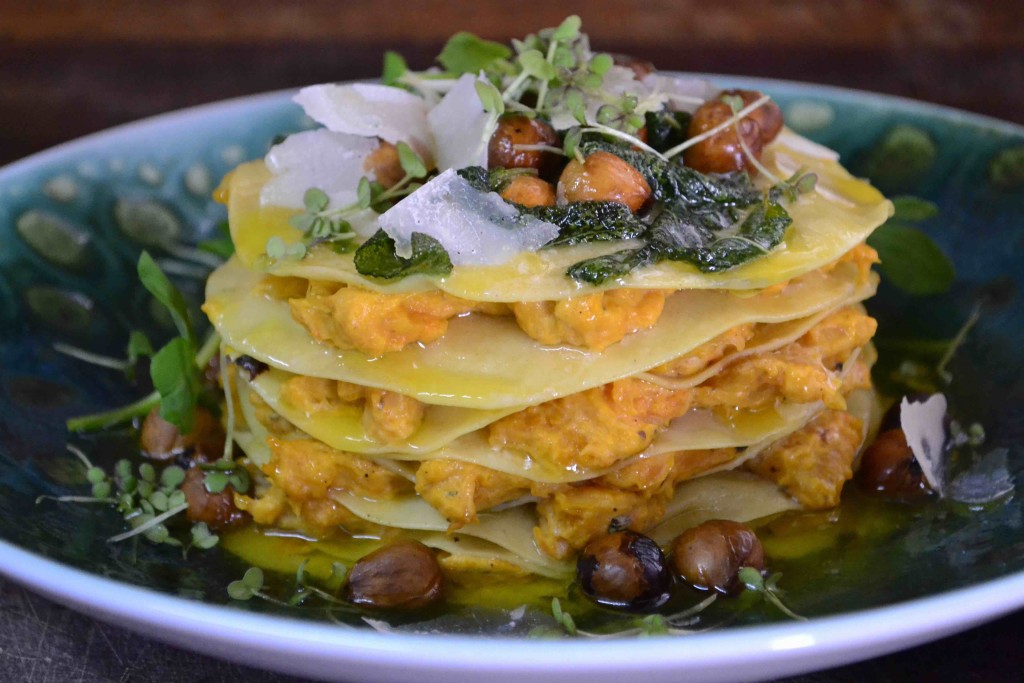 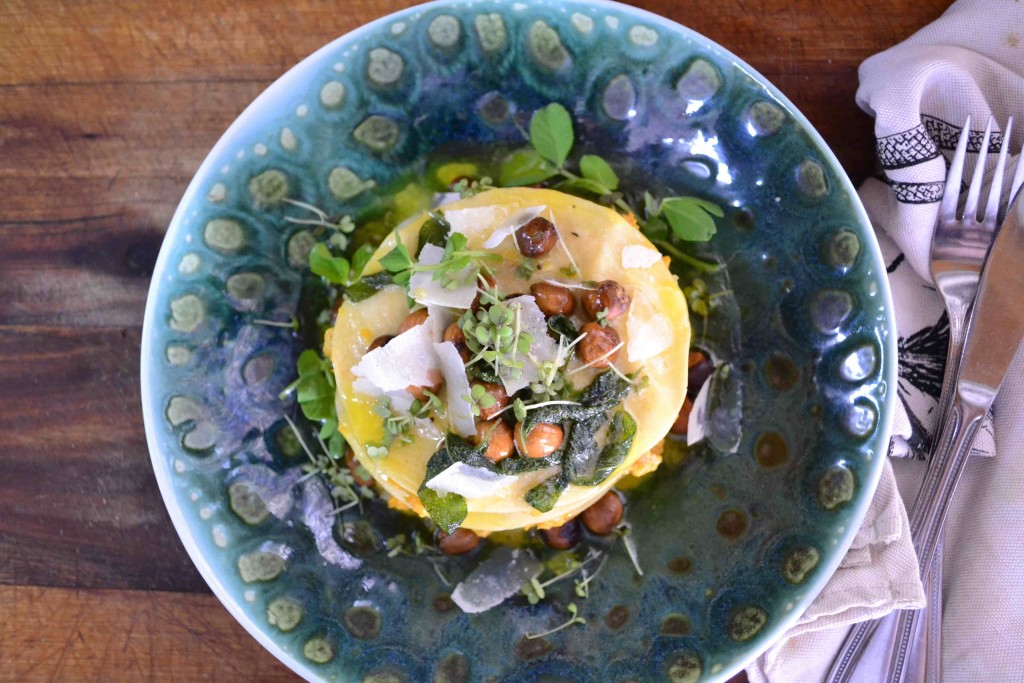 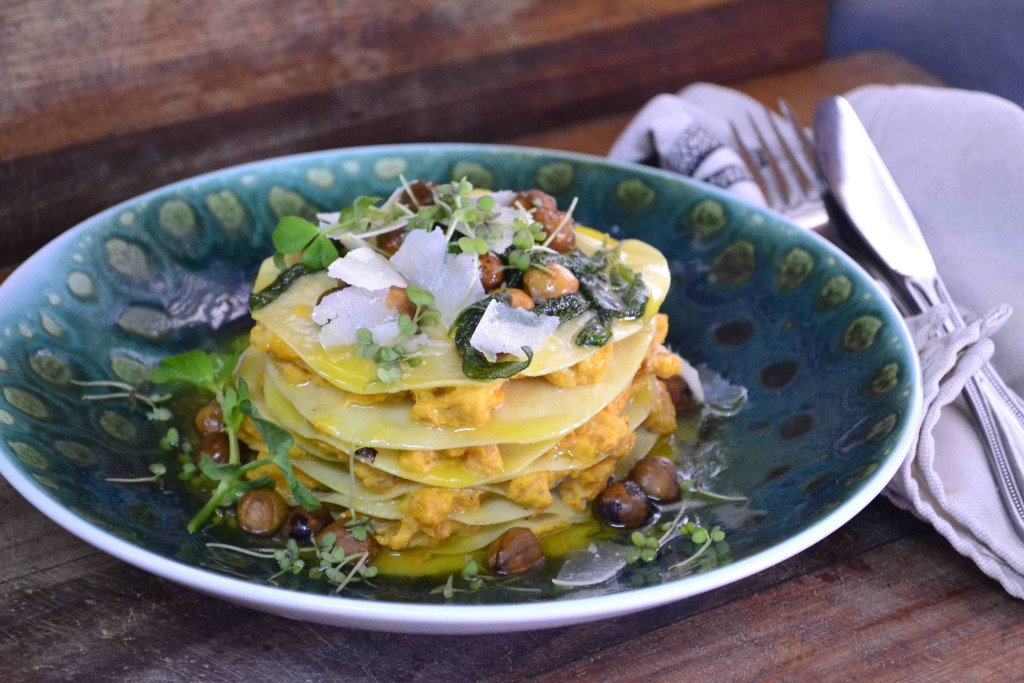 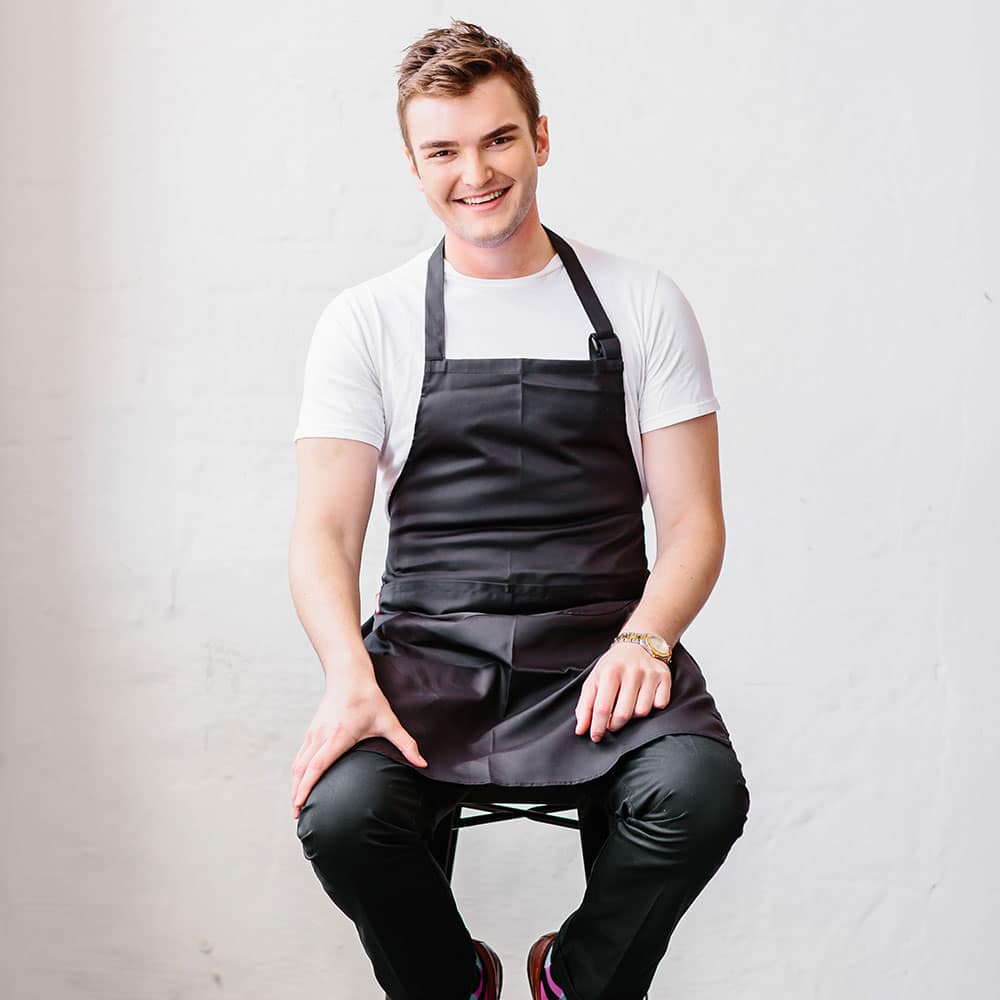